In the months since I’ve started watching it, My Hero Academia has quickly become my favorite battle shonen series. It’s not particularly mold-breaking; it uses the same genre tropes as most other series of its ilk. Its main strength is that it brings the genre’s strengths to the forefront, with a supremely likable ensemble cast and exciting battles, while leaving behind many of the genre’s typical weaknesses. One of battle shonen’s greatest struggles has long been how to incorporate its female characters, and My Hero Academia handles the situation with rare grace and aplomb. However, no work of art is free of biases, and while My Hero Academia avoids many issues associated with the genre, there are still many sexist biases deeply encoded in the series.

“Battle shonen” refers to the subgenre of action-driven manga aimed at boys that focus on battles between characters, as the name implies, and are structured around arcs with the series’ overarching goal being only vaguely defined, if at all. They’re dominated by a number of conventions the audience have come to expect, such as a young male protagonist with a core group of friends, a rival, tournament and training arcs, and a series of increasingly powerful villains. Popular battle shonen like Naruto, One Piece, Bleach, and Fairy Tale can run for decades. My Hero Academia is a relatively new entry to the genre, drawing much of its inspiration from Western superhero narratives and synthesizing that with the typical ideas of the genre.

These series have long tended to struggle with what to do with their female characters. They are often introduced early in the series, when the protagonist has yet to set themselves apart from the pack, and become part of the core cast. However, as the male protagonist gets more and more powerful, the girls on their team often lag behind them in ways that the boys don’t. They become relegated to healers or support duties, but rarely get the spotlight in battle. They get designated female enemies to fight against, before they are neatly removed from the conflict. They become damsels for the boys to rescue. On the rare occasions that women are powerful fighters or mentors, they are often sexualized to the point of disrespect.

My Hero Academia neatly sidesteps most of these issues by treating its female characters as interesting, integral members of the ensemble cast. They have varied, likable personalities and appearances, with useful quirks that make them valuable contributors to the team both in and out of battle. No one embodies this more than Ochaco Uraraka, Izuku’s cheerful friend with the ability to make things float. She’s a clear choice for the love interest – a friendly girl-next-door type who meets Izuku by using her quirk to prevent him from tripping and falling on the day of the entrance exam – and he does indeed develop a crush on her. Despite his feelings, friendship defines their relationship, rather than attraction, and they thus far remain close but platonic. His crush on her is so secondary to their camaraderie that it’s easy to forget that it even exists. Such relationships between male and female characters are rare in any genre, but I honestly can’t remember last time I saw it in a battle shonen series; they tend to be mentor-student or focused mainly on romantic feelings. Rather than treating her as a means to an end or an object of Izuku’s affection, mangaka Horikoshi writes Ochaco as a person first, with same amount of interiority and individuality as any of the male characters.

The aniblogger sphere has heaped praise on the episode “Bakugo vs. Uraraka” for its approach to pitting Ochaco against Katsuki Bakugo, Izuku’s longtime rival, and for good reason. Bakugo, whose quirk allows him to combust his sweat made of nitroglycerin, is one of the most powerful and dangerous competitors in their school’s sports festival tournament. Izuku tries to help Ochaco by coming up with a strategy for her to fight him, worried that she’ll be immediately and thoroughly beaten by the volatile Bakugo. She enters the ring with a quavering smile that fails to cover up her nervousness. Once the fight gets going, it becomes clear that she never needed Izuku’s help; she develops her own strategy based around getting Bakugo to blow up the ground and making the rubble float above his head, crashing down at a key moment. She’s a bright girl who has been using her quirk for close to a decade; she is perfectly capable of coming up with her own strategy.

It seems possible that Horikoshi scripted this fight specifically to call out the sexism endemic to the genre. As the fight continues and Ochaco takes explosion after explosion, the onlookers jeer at Bakugo, angry at him for “picking on” her and imploring her to send her out of bounds. Ochaco is cute and harmless-looking, causing them to perceive her as less capable. Their teacher Aizawa jumps onto the mic, calling them out: “Was that a pro saying he’s playing around? How many years have you been a pro? If you’re saying that with a straight face, there’s no point in you watching anymore, so go home! Go home, and look into changing careers! Bakugo is being careful because he’s acknowledged the strength of an opponent who has made it this far. It’s because he’s doing everything he can to win that he can’t go easy on her or let his guard down.” Ochaco may be cute and lacking in raw physical power, but she has made it this far on her own strength; the audience asking him to knock her out because they’re uncomfortable seeing her fighting all-out against a clearly powerful male opponent is selfish and disrespectful, on top of making assumptions and not taking her seriously. Aizawa points out their implicit biases, that they assume she is not a worthy opponent because she is female, and this particular bias rears its ugly head over and over in battle shonen as the female characters are relegated to the sidelines. Even after the fight, their classmates tease Bakugo for looking like a villain beating up on a frail girl – it’s still an uphill battle for female fighters to be taken as seriously as male ones.

It’s not hard to see why the characters would assume girls are weaker; there’s plenty of in-universe evidence to uphold that. Thus far, we’ve only met four female professional heroes: the elderly healer Recovery Girl, Mount Lady, Uwabami, and Midnight, compared to about a dozen male professionals. In the Unforeseen Simulation Joint, not a single villain is female. Even in Class 1-A, under ⅓ of the students are female. In early planning stages, it was only four; two of them, Tohru and Tsuyu, were originally planned to be male. He changed them to make the gender balance more even, but that did not come close to fixing the problem. The rest of the school appears to suffer from the same imbalance. It’s an oft-quoted statistic that men perceive groups as majority-female once more than ⅓ are women, and My Hero Academia perpetuates that issue.

My Hero Academia has a relatively low level of fan service for the genre, especially compared to series like One Piece and Fairy Tail, which delight in regularly displaying the mostly-naked bodies of their female cast. The aforementioned Mount Lady and Midnight are both highly fetishized; Mount Lady, a literal giantess, introduces herself with a coy, “Nice to make your ass-quaintance!” and Midnight bases her whole aesthetic around sadomasochism, with the epithet “The R-Rated Hero” and a flog whip as a weapon. Uwabami makes her much of her living as a TV celebrity and hires her female interns on the basis of their looks. While the students of Hero Academy are quite realistically proportioned, those two are very busty with costumes that highlight their curves. Class A’s Mineta is particularly an affront, so much so that hating him has become a meme on social media. He routinely attempts touch or peep on his classmates without their consent. While the girls may retaliate, especially Tsuyu, these moments are played off as jokes. When he tricks the girls into dressing in cheerleader uniforms, they become angry, but they continue to wear them anyway, to the delight of the boys in the class. 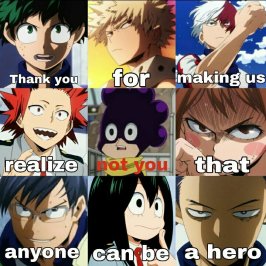 A look through the series’ supplementary material reveals more of Horikoshi’s biases. Each character receives ratings in five different areas, including power, speed, technique, intelligence, and cooperation. Across the board, the girls of Class 1-A have low ratings in power, with an average of only 1.83 out of five, and high ratings in cooperation. While the female cast is truly a delight and I enjoy how they’ve worked together in risky situations, I’d love to see a female character as ornery and temperamental as Bakugo. Instead, this continues to prop up the stereotype that women are naturally better at working together than men, and that they must be sweet and gregarious. In a universe where the majority of people have supernatural powers, there is no reason for a lack of physical strength among the female cast as well. Many of the male characters’ quirks are so powerful we never see them throw a punch, including Todoroki, one of Izuku’s chief rivals. Even if you buy into the idea that women simply lack the physical strength of men, it would be simple for a girl to have a power that strong in combat.

These criticisms are not meant as an indictment of Horikoshi or My Hero Academia; everyone has biases they subconsciously insert into their work. “Bakugo vs. Uraraka” demonstrates a level of awareness that most battle shonen lack in addition to an effort to improve how girls are portrayed in these kinds of stories. Coexisting with the issues discussed above doesn’t make Horikoshi a hypocrite, nor should it necessarily reduce anyone’s enjoyment and excitement all the show’s myriad strengths.

My Hero Academia is a delightful series, and it has merited much of the praise it has received. However, that does not mean it’s immune to criticism or doesn’t have its own unconscious biases encoded in it. Weekly Shonen Jump’s readership is almost at parity; while it may be aimed primarily at boys, its writers and editors should still be aware of the female readers and takes steps toward inclusiveness. My Hero Academia is so close, but we should not simply ignore or excuse its shortcomings.

17 thoughts on “Confronting Biases in My Hero Academia”