There’s been one kind of curious consistency across the worst of the worst I’ve looked at – the tendency to declare the abusive boyfriends, “gentle.” This never made sense to me – how can you call someone gentle right after he slapped you across the face? “Gentle” is a way of behaving and treating others, not some innate quality. It is the antonym of “rough”, which is how one would describe a man who shouts and hits. After seeing it come up again and again, I figured it must be a quirk of translation. Sometimes a particular way of translating a word or phrase becomes standard practice, even if it doesn’t totally make sense in English.

END_OF_DOCUMENT_TOKEN_TO_BE_REPLACED

This Week
Boys Over Flowers vol. 20
Dengeki Daisy vol. 13
A Devil and Her Love Song vol. 12
The Earl and the Fairy vol. 4
Gaba Kawa

A few weeks ago, I talked about Children of the Whales, and my frustration that shoujo and josei are rarely considered worthy of the “prestige” label. Men have long been considered tastemakers, while women and girls, though about half the world’s population, are considered a “special interest group”. This refrain is as old as feminist media criticism itself, and works aimed at women still struggle to get the recognition they deserve.

But at the same time, sometimes I don’t care if men don’t recognize the merits of shoujo and josei manga. I look at all this art being made by women, for women and girls and I don’t care that men don’t appreciate it, because it’s not for them! The people who they’re intended for love them and appreciate them, so what does it matter? Recognition and prestige are great, but they aren’t the end-all, be-all. It used to be that men were the gatekeepers, so their disdain for shoujo prevented it from being brought over, but now the US anime industry has plenty of women working hard to make these titles available. My main issue is the lack of criticism and scholarship surrounding it – I bought Straight from the Heart, a scholarly text about shoujo – but there are bloggers and writers working hard to rectify that.

END_OF_DOCUMENT_TOKEN_TO_BE_REPLACED

It’s been a while since I updated my recommendations! I’m going to start aiming for at least quarterly updates, so while it may not include all the best anime from the previous season, it’ll give you a better idea of what I’ve been reading and watching lately.

In this:
Beauty is the Beast
Pink
Fruits Basket (manga update)
Dawn of the Arcana
Complex Age
In This Corner of the World
Flip Flappers
Recovery of an MMO Junkie
Fushigi Yugi (yes, really!) 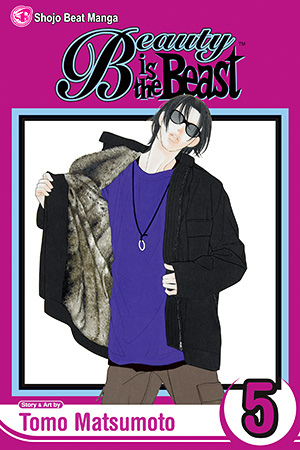 Beauty is the Beast

When Eimi Yamashita’s parents move abroad for work, she decides to go live in her school’s dorm. Her quirky, off-beat personality and carefree nature quickly endear her to her dormmates, as well as some of the residents of the boys’ dorm. She finds herself most drawn to Wanibuchi, a young man with a dangerous reputation.

Beauty is the Beast makes an interesting addition to the army of shoujo manga centered around a troubled bad boy. Viz’s copy makes it sound like a romantic melodrama, but it’s much closer to a slice-of-life comedy with some sprinkling of drama. Mangaka Tomo Matsumoto draws on her own experiences from living in a dorm, using them as a source for characters and plot threads, giving it a gentle, grounded atmosphere. I don’t know if Eimi is based on reality – she’s a bit too airheaded and strange to feel quite real. Wanibuchi, on the other hand, is indeed a troubled bad boy, but in a much more believable way than most of his ilk. His anger is justified, and his sense of alienation as a returnee comes across keenly. He never turns his anger against Eimi, nor does the narrative put pressure on her to “fix” him. It’s a light, pleasant read with enough darker undertones to make it compelling. Unfortunately, it ends quite abruptly – I suspect it was cancelled in its original run. It’s a shame, because I would have loved to read more.

END_OF_DOCUMENT_TOKEN_TO_BE_REPLACED

It’s time to answer yet another question absolutely nobody has asked!

As I go through the Shojo Beat catalog (which has many good titles I’m looking forward to reading), there’s been a few that I’ve skipped even though they are available. I chose not to cover series like Crown of Love and Everyone’s Getting Married, nor will I be reading Nana or Honey and Clover. These are all great series that I enjoy, but they’re josei rather than shoujo, i.e. series aimed at an adult female audience rather than a teenage audience.

END_OF_DOCUMENT_TOKEN_TO_BE_REPLACED

As I said last week, this coming season brings an unprecedented eleven shows clearly and explicitly aimed at a female audience, not counting shows that could go either way or appear to be aimed at a general audience. I’ve been eyeing the databases, looking over what shows I’m anticipating most. I don’t have the best track record for keeping up with current anime – I still have one episode each of Sakura Quest and Code: Realize to watch – but I’m still eager and excited to see female viewership being explicitly marketed to. What are these shows?

END_OF_DOCUMENT_TOKEN_TO_BE_REPLACED

This Week:
Boys Over Flowers vol. 17
Dengeki Daisy vol. 10
A Devil and Her Love Song vol. 9
The Earl and the Fairy vol. 1

The spring anime season fast approaches and with it comes an avalanche of female-oriented new series. Looking at the spring chart, I counted no fewer than 11 series unambiguously aimed at women and girls, which is unprecedented for as long as I can remember. Not all of them appeal to me, and some of them will probably even be bad. But in a landscape where we get this much variety, it doesn’t feel like just one or two series have to represent your entire marketing demographic on their own. It’s okay for some of them to be bad, because you can easily find something else that appeals to you more.

END_OF_DOCUMENT_TOKEN_TO_BE_REPLACED

I’ll keep this short, because this installment is already long enough.

Two series finish this week, one that I’ll miss and one that I definitely won’t. In the past, when series wrapped up, I just posted the total points for wrap-up. But I’ve been taking much more granular data than that, counting up how many instances of different forms of abuse occur. And this week, as I finished up Black Bird, a series that has been a thorn in my side since the very start, I thought, “What’s the point of that granularity if I don’t actually do anything with it?”

END_OF_DOCUMENT_TOKEN_TO_BE_REPLACED

Have y’all checked out Children of the Whales yet? Netflix is still holding the anime hostage, but the first volume of the manga is out in English. It’s good, solid fantasy that builds up a world I’m interested in exploring more, with an interesting magic system and plenty of mystery. The character writing is a little stiff, but the intrigue more than makes up for it.

It’s also the first shoujo series to be published under the Viz Signature line. For the uninitiated, Viz has a few imprints: Shojo Beat for their shoujo titles; Shonen Jump for, well, Shonen Jump; Viz Select for smaller digital releases; and Viz Signature, which they define as “Bringing classic and cutting-edge graphic novels to an audience of discerning readers hungry for sophisticated stories and superlative art.” This is great, except the line reminds me more of the tastes of old-school comic book guys that blocked shoujo out of the US manga scene for much of the 80’s and 90’s. Yes, it does have some complex, challenging series, such as the various works of Naoki Urasawa and Inio Asano. But, other than a couple of Fumi Yoshinaga works and Children of the Whales, it’s almost universally seinen.

END_OF_DOCUMENT_TOKEN_TO_BE_REPLACED

There’s no one way to read a story

Last week, Anime Feminist had an interview about mental illness in Japan and anime with a former Aokigahara volunteer go up. It’s a really lovely interview and a great read – I highly recommend it if you haven’t checked it out yet. Makoto Kageyama speaks touchingly about their own mental health struggles in the context of how such things are regarded in Japanese culture. Their discussion of how anime and manga treat depression and anxiety like things that can be cured through the power of friendship contextualizes quite a few series. END_OF_DOCUMENT_TOKEN_TO_BE_REPLACED

I just finished rereading Fruits Basket, one of my favorite series from when I was in high school. It’s a flawed work, but overall it holds up really well for when it came out and for a mangaka’s first major title. The story is explicitly about abuse, portrayed both literally and through metaphor, and it handles the subject better than most fiction. Most of the characters are victims of abuse, and the story admirably portrays how they’re unable to connect to others healthily. The series ran over 20 volumes, and it’s not until close to the very end that the main couple are ready to connect romantically. That got me thinking – for the highest-scoring series I’ve covered, what is at the root of their trauma?