Sorry this update is a week late – it’s con season, and panels and interviews means I have a ton of prep work to do. I’ll be presenting my Romance and Abuse in Shoujo Manga panel at both Otakon and AnimeFest, so come over and say hi if you’re there!

I accidentally rebooted my computer and I hadn’t saved my spreadsheet for quite a while and I lost so! Much! Data!

END_OF_DOCUMENT_TOKEN_TO_BE_REPLACED

I planned for last year to be my final Otakon. It would be bidding a fond farewell to Baltimore and the summers of college, taking a final chance to go to the aquarium, and just a final coda to my relationship with east coast conventions.

Then I had so much fun seeing my friends and hanging out with interesting people that I said, “Fuck that” and booked a hotel room for next year.

And then. And then! Anime Fest announced that Sayo Yamamoto and Mitsuro Kubo would be guests, and I had sworn to myself years ago that I would hop on a plane to any convention that had Yamamoto as a guest. And it was the weekend after Otakon. So my extended weekend turned into a week and a half.

END_OF_DOCUMENT_TOKEN_TO_BE_REPLACED 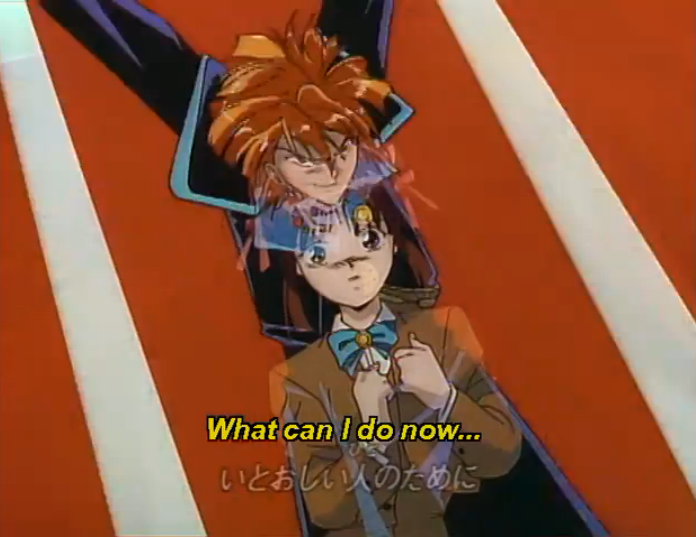 Episode 13: For the Sake of Love

I’ll be real y’all: I don’t have THAT much snark for these episodes. Turns out, the second quarter of Fushigi Yugi is the show at its absolute best, when the characters are at their most sympathetic and the plot moves at a brisk pace. Their choices are in-character and make sense and the story progression is logical. Enjoy it, but I may not be as crabby about it as usual.

Keisuke reads The Universe of the Four Gods back in reality, somewhat uncomfortable about how all the boys want to sex up his little sister. Lucky for him and everyone else involved, before Miaka and Tamahome can get their sloppy makeouts going, Hotohori busts in, shouting about sensing evil. To prove he’s not just cockblocking, a threatening voice comes out of nowhere, informing them that Kutou has sleeper agents everywhere and could totally defeat Konan whenever they want. Why haven’t they yet? Because their priestess is horny for Tamahome. To prevent her from destroying the country out of sheer sexual frustration, they must deliver Tamahome to Kutou. I guess it’s always been the case that sex plays a major role in international conflict, but it’s funny to see international relations dictated by hormonal teenagers.

END_OF_DOCUMENT_TOKEN_TO_BE_REPLACED

Why are you such a misogynist?

Why do you hate stories written by women?

Why do you think women and girls are too stupid to tell reality from fantasy?

Why would you think –

That’s the only thing I can assume from this blog!

Apparently my continued pursuit of this topic, along with my lack of more positive coverage of shoujo, has given some people the deeply mistaken impression that I am suspicious or disdainful of it and that I only read shoujo manga with this aspect in mind. In retrospect, I can see where that impression comes from. This has become something of a passion project for me. It’s a topic I consider deeply important, so it’s only natural that I give it a lot of focus. However, because of a number of factors, I haven’t written as much as I wanted to on other, more positive aspects of the demographic. In order to combat this perception, I’m going to include in these posts short essays about shoujo manga and my relationship with it that I hope will clarify things.

END_OF_DOCUMENT_TOKEN_TO_BE_REPLACED

In the months since I’ve started watching it, My Hero Academia has quickly become my favorite battle shonen series. It’s not particularly mold-breaking; it uses the same genre tropes as most other series of its ilk. Its main strength is that it brings the genre’s strengths to the forefront, with a supremely likable ensemble cast and exciting battles, while leaving behind many of the genre’s typical weaknesses. One of battle shonen’s greatest struggles has long been how to incorporate its female characters, and My Hero Academia handles the situation with rare grace and aplomb. However, no work of art is free of biases, and while My Hero Academia avoids many issues associated with the genre, there are still many sexist biases deeply encoded in the series.

END_OF_DOCUMENT_TOKEN_TO_BE_REPLACED

The response to my “Romance and Abuse in Shoujo” panel has been consistently overwhelming. The transcripts from my Sakura Con 2016 get new pageviews every day, and every time I present it, I get people approaching me afterward telling me how meaningful they found it. I’m incredibly proud to have put together something that touches people’s lives and resonates with their experiences so strongly.

Many of the series I used in my presentation are older, because those were the ones that made me take notice of this issue years ago. However, I’m not sure how relevant this is to current audiences – how many people sitting and listening are familiar with Boys Over Flowers or Hot Gimmick? New volumes of shoujo manga come out every week, thanks to the hardworking localizers at companies like Viz, Seven Seas, and many others. I curate my reading list pretty carefully, so for years I’ve made a point of looking for series with healthy relationships, or series that are aware of the abusive dynamics they contain. Starting work on this project forced me to engage with series I actively avoided, but what about the ones I just never heard of?

So I started wondering, how do the numbers break down? How many of the series that make it to US shores really do romanticize abuse, and how many don’t? In search of these answers, I’ve started a new side project: “Abusive Relationships in Shoujo by the Numbers.”

END_OF_DOCUMENT_TOKEN_TO_BE_REPLACED

It wouldn’t be far from the truth to describe Kobayashi’s Dragon Maid as reverse-isekai show – Tohru has, after all, been sent to another world and must learn to live in a world where the rules are entirely different. However, its slice-of-life nature separates it from the likes of Fushigi Yugi or Re:Zero, where quests and other plot demands direct the flow of the narrative. Rather, Kobayashi’s Dragon Maid has a gentle pace, portraying the everyday life of Kobayashi, Tohru, and their friends with plenty of bawdy comedy and only a few occasional hints at a greater plot. The slice-of-life approach creates opportunities for quiet contemplation, even under the fan service and sexual jokes, and delivers a charming message about adapting to a new life in a new culture and found families.