A popular thing to do among anibloggers is to watch the first episode of every new show each season. Me, I don’t roll that way. I simply don’t have the time or energy to watch four or five new episodes of anime each night – I tried it once and I didn’t even enjoy the ones I felt like I should have, because I burned out so fast. I prefer to watch whatever catches my eye and/or is getting good word of mouth. Sometimes they’re everything I was hoping for, but just as often, they’re duds… but at least I didn’t waste my time watching shows I knew I wouldn’t enjoy. This season, I’m also on the lookout for shows that would be worth giving weekly coverage from the point of view of the blog.

Without further ado, let’s look at the shows! 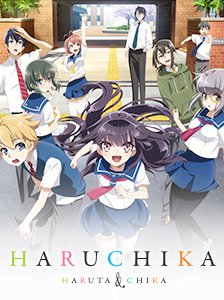 Chika’s starting her first year of high school, and she’s looking for an image change: instead of the energetic, tomboyish volleyball player she was in middle school, she wants to transform into a quiet, ladylike flutist in the brass band club. She’s even more determined when she meets the handsome music teacher, Mr. Kusakabe, but her childhood friend Haruta, with a talent for bringing out the sides of her she wants to keep hidden, is also in the band. Available streaming on Funimation.

For most of my life thus far, every time I transitioned to a new stage, I promised myself things would be different. I’d be gregarious, popular, and confident; I’d get work hard and get good grades; I’d be cute and desirable to the boys. That never really happened, of course, and I’d fall back into my old shy, unfocused, nerdy self before I knew it. Now I realize such reinventions are almost impossible to pull off, since real change is slow, but Chika’s sentiments are familiar to me. She and Haruta fall back into an easy, comfortable back and forth, mercifully untainted by any sort of “childhood promises” or adolescent sexual tension. Truly platonic male-female friendships are rare in anime, and it’s refreshing to see to see one where the chances of the two getting together seem quite slim (there’s a reason for that).

That said, this is actually more of a high school mystery series than a band anime. On the heels of Sound! Euphonium, that’s probably for the best – the earlier series had truly stunning animation of the band playing their instruments, and HaruChika… doesn’t. It’s not a pretty series in the least, and Chika’s renegade hair strands are borderline distracting. Still, the writing is fresh and fun, and the first episode’s mystery was engaging enough. In a busier season, it may not have made the cut, but this winter has fairly slim pickings, so it’s worth a watch.

The verdict: Not the most revolutionary show, but fun and entertaining.

Chances of weekly coverage: Middling. I don’t know how character-driven it’ll be, but I hope to see Chika come into her own as a character 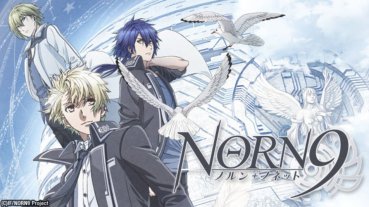 Eleven teenagers with superpowers ride the sky ship Norn to their destinies. The ship is beautiful, and the eleven live together in peace and harmony, despite the fact that they may be forced to become become enemies someday. They are servants of a mysterious organization known as The World that controls various governments across the globe, and live in hope that it can attain peace and they won’t be forced to fight. They pick up a twelfth child, a girl who remembers neither her name nor her past. Available on Hulu.

Norn9 is based on an otome game, and boy does it show. The amnesiac main character is thus far more or less a blank slate, safe for viewers to project themselves onto as she cavorts around the ship with the various teenage boys. The boys are all handsome in a fairly generic sort of way, but none are particularly well-drawn. The Norn itself is quite beautiful, all glass and water and plant life, and the music swells dramatically, but the whole production feels a bit… lifeless. It’s hard to put my finger on, but the characters don’t really talk or act like people, and a shadowy organization known as The World isn’t the most new or exciting concept.

The verdict: An interesting concept, but a limp production. I may give another couple episodes a try.

Chances of weekly coverage: Pretty slim. Unless it blows me away in the next couple episodes, there’s not much to say about it. 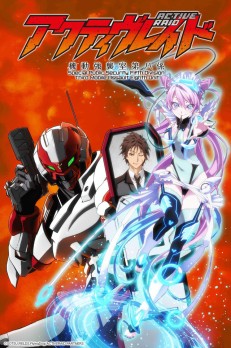 Asami Kanzari is just about to start her first job at the Tokyo Metropolitan Police’s disgraced Section 8, and she couldn’t be happier. The Ikebukuro-based unit uses powersuits known as Willwear to stop similarly-suited criminals, but it’s developed a reputation as a nest of incompetent misfits. Asami is there to clean things up, once and for all, but when she meets her new colleagues, she realizes she may have her work cut out for her. And really, is she any better than they are? Available on Crunchyroll.

Imagine the first couple episodes of Tiger and Bunny, but minus the charm and writing quality, and told from the point of view of a third party. That’s the closest comparison I can think of with Active Raid. The first half of the episode is marred with clunky exposition as Asami summarizes her own situation to herself on the train, and gets worse as the other characters introduce themselves in the format of “age, position in the squad, random fact about self.” Chief director Goro Taniguchi is extremely hit or miss: he’s made truly excellent, thoughtful series like Maria the Virgin Witch and Planetes; but he’s also made some truly dumb action series like Code Geass and Infinite Ryvius and Active Raid is, at first glance, more of the latter.

The show picks up somewhat in the second half, when Section 8 is called upon to stop a couple teenagers in Willwears from spreading chaos. The action is competently directed and the suits had some pretty interesting abilities. This is also where the comparison to Tiger and Bunny comes in – the two members of the unit who don the suits are a mismatched pair, one straitlaced and blonde and his partner dark-haired and reckless. They sure are pretty, and we get to see them in nothing but speedos as they put on their suits! Asami is almost completely forgotten in the second half until she is forced to conceal the two from the public when their Willwears run out of battery and fall off.

The verdict: Those boys sure are pretty! And they smile cute! And odd couple cops are always a fun source of sexual tension. But is that enough to keep me watching through the weak writing? Probably not.

Chances of weekly coverage: Almost nonexistent. Asami may be they ostensible protagonist, but those two are probably going to carry the show. 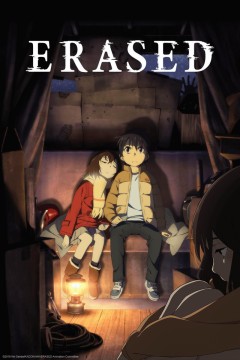 Twenty-nine-year-old Satoru fears himself. Memories of an incident when he was 11 haunt him – instead of inviting a classmate to walk home with him, he chose to leave her. That girl was kidnapped and murdered, and an adult Satoru trusted was convicted. Now, because of those regrets, his promising career as a manga artist has ended and he’s stuck working part-time as a pizza delivery boy. He also has a mysterious power he calls Revival – sometimes, without his control, he goes back in time a few minutes, giving him the ability to prevent something terrible from happening. Available on Crunchyroll, Funimation, and Daisuki.

The first episode of Erased is one of the biggest standouts of the season. It is brilliantly paced and directed, slowly building toward a breathtaking finale that left me aching for the next episode. Satoru’s actor, Shinnosuke Mizushima, has never done anime work before, but his restrained performance brings the character to life perfectly. The standout character of the episode, however, is Satoru’s mother, Sachiko. Sachiko is just the right balance of loving and acerbic, caring for her son after he’s injured in a Revival-related accident while making it clear that he’s not her sole priority. She’s whip-smart and observant, and she drives the episode’s plot forward just as much as, if not more than her son. I don’t know how much of a role she’ll play in the rest of the show, but I sincerely hope to see more of her.

Chances of weekly coverage: Pretty low. It’s excellent, but it’s also very much male-driven. It could be worth an in-depth look once the show is complete, but I doubt there’ll be much for me to say week-to-week. 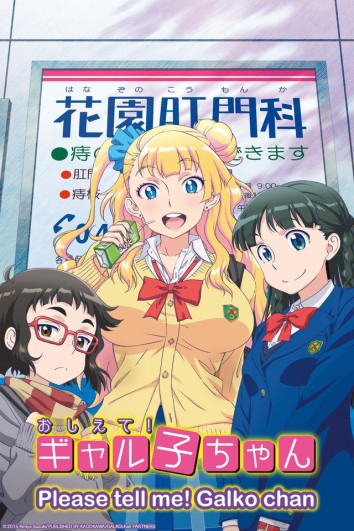 Galko-chan surprised me. Galko’s character design, with her huge breasts under a clinging cardigan, doesn’t exactly inspire faith, and the “group of girls with differing but archetypal personalities doing nothing but talk” format hasn’t been a recipe for success either. Yes, financial success, but nothing I would waste my time on. But Galko-chan caught my attention by being simply gross. The girls talk about all sorts of bodily functions, from pubic hair thickness being connected to eyebrow size – bushy-browed Otako confirms this theory – to Galko happily scarfing down spicy food because she’s constipated and doesn’t have to worry about the consequences. The episode moves briskly through its bodily humor, covering several gags in seven and a half minutes.

The most remarkable is despite the bodily nature of the humor, including discussion of breasts, butts, and genitals, it never feels fetishistic. I mean, I’m sure there are some people who are into that, but they usually have to go pretty deep into Akihabara to be pandered to. Occasionally boys try to talk to Galko about her chest and her classmates gossip about her being a promiscuous party girl because of her style and her figure, but they’re roundly dismissed. It’s weirdly refreshing watching girls being disgusting and unladylike, and reminds me of the kind of conversations that send me fleeing from my foul-mouthed mother, who laughs every time she hears the Johnny Cash song “Ring of Fire”.

The verdict: It’s hard not to appreciate when a show where girls are anything but ladylike.

Likelihood of weekly coverage: Jury’s out. I’ll be watching, but it’ll need to develop into something more than gross-out humor to merit weekly coverage.

Next up: Sekko Boys, Show Genroku Rakugo Shinju, Grimgar of Ash and Fantasy, Dagashi Kashi, and Snow White with the Red Hair S2