This year, I was more excited for Sakura Con than I have been for a convention in a long time. I had friends coming in from out of town, was doing three panels, and looking forward to seeing Rie Matsumoto, one of the most talented directors working in anime. Sure, I was broke, but that’s been the case at conventions for the last… five years? Ten years? Since I moved back to the US, for sure. It’s hard out there for a preschool teacher/blogger. But that doesn’t really matter – I’m not much of a Collector of Things. I’m happy keeping my convention budget to the con membership.

Friday morning, I headed downtown just in time for the first panel I was interested in – “Race and Ethnicity in Anime”, presented by Hanna White and Heather Holland. They started off with a game inviting audience members to guess the race/ethnicity/nationality of several anime characters, including Haru from Free!, Usopp from One Piece, Michiko Malandro from Michiko and Hatchin, and several others. The purpose of the game was to get the audience members thinking critically about how race is presented in anime. After covering the differences between race and ethnicity, the delved into the history of the concept of mukokuseki, or the concept that anime is “culturally odorless” and thus appealing to international audiences. This stems from the cartoonish style pioneered by Osamu Tezuka, who was famously influenced by American cartoons from an early age. The simplified style is also owed in part to anime’s low budgets, wherein characters must be simple to draw so that different people can draw them repeatedly without them looking different. The exaggerated medium also lends itself to unreality, such as the “colorful hair phenomenon” – Americans tend to perceive hair color as related to race to a greater degree than the original Japanese audience. Furthermore, when anime has visibly diverse characters, such as in Bleach, fans readily take an interest in this diversity and actively discuss it.

After the panel on Race and Ethnicity in Anime, it was time to prepare for the first of my three panels, Women-Driven Anime. Things didn’t get to a great start – the projector didn’t work, throwing me into a bit of a panic when my nerves were already high. A tech person came in and got it going, and the room filled up quickly. Unfortunately, it wasn’t until the panel started that we realized my co-panelist Jared’s mic didn’t work and the audience couldn’t hear him past the second row. I tried angling my microphone toward him, but because of his non-existent depth perception, he didn’t realize what I was doing and clammed up. Flustered and left to carry the panel by myself when it had been designed with a sort of back-and-forth in mind, I struggled through discussions of several different series. It wasn’t close to what I had hoped for, so if you came and were disappointed, I apologize. The less detail discussed, the better, I think. It was a learning experience, to be sure, and next time I’ll do it better.

After that, I cruised the dealer’s hall searching desperately for something for Rie Matsumoto to sign. No luck – neither the Kyousougiga nor the Blood Blockade Battlefront home video releases were out yet, and I couldn’t find any related merchandise. Instead, I was left to curse fate as I stood in line with an autograph board generously gifted by my friend Michelle, while she doodled sketches for the people who had found Kyousougiga artbooks. Matsumoto was adorable, but looked jet-lagged and cold, and spent the whole con bundled up in a heavy coat.

The final event of the evening was my panel on Female Anime Directors, which I did with that same Michelle. After a brief planning session and run-through of the slideshow I’d prepared, we were ready to go – plus, we had to add entries for the just-announced Yuuri!! On Ice and Cheer Boys! Fortunately, all the equipment worked this time. I unfortunately forgot to record the audio, but I’ll post the presentation later. Basically, we discussed what anime directors do – they supervise all creative aspects of the show, making sure that the visual, auditory, and writing all work in harmony and in service of telling the story. Some directors are little more than managers, while others have a firm creative vision they bring to the project. They are also beholden to production committees, corporate groups funding the show who want their interests represented in the project. We listed all female-directed anime, then delved into individual directors such as Sayo Yamamoto, Rie Matsumoto, and Soubi Yamamoto. I think the panel went very well, which heartened me for the next day’s panel about abuse in shoujo manga.

The next day, I slept in and missed the panels on Cultural Cross-Pollination and General Mythology in Anime & Manga I had planning on going to. Oops. I got there just in time for the end of the panel, “Anime Character Design 101 from Slayers to Overlord by Takahiro Yoshimatsu” and the start of the Q&A session. I decided to ask him why lately, anime tiddies have resembled real breasts less and less and more resemble water balloons surgically attached to those poor women’s chests. He laughed and said, “It may be hard to believe, but some people actually like that. Maybe some of them are in this room right now.” After meeting some other friends, we searched the Dealer’s Room and I picked up a Yuu Narukami figma as repayment for a friend who has an annoying habit of buying nice things for me. I also ran into an old friend – Elmira Utz, Sakura Con’s Director of Publicity and a friend from my IRC days back in high school and college. 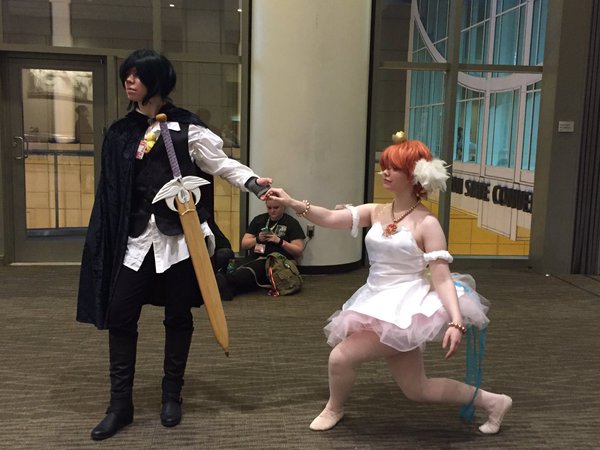 We finished up our shopping when it was time to get ready for my panel, “You Only Hurt the One You Love: Mechanics of Abuse in Shoujo Manga”. The panel moderator asked me if it would be okay for some press members to reserve some seats, and I consented. A group of young men came in, and I asked what outlet they were with. They said it was with a place called crymore.net [insert donotlink here] and while the URL set off some alarm bells in my head, I was mentally focused on getting ready and didn’t want to make a scene by kicking them out, so I let them stay. The panel room filled up completely, and I was ready to go. I started off discussing shoujo manga and its readership, and how I – and many of its other fans – love it for its female-focused storytelling, but it has a lot of problems. I discussed five main series for the purpose of the panel: Hot Gimmick, Paradise Kiss, Hana Yori Dango, Black Bird, and Wolf Girl and the Black Prince. I described several harmful fictional tropes, such as the romanticization of age differences and treating love interests as if they bear no responsibility for their actions. After that, I delved into the real signs of abuse, including verbal, sexual, physical, and emotional. I’ll be posting a full transcript of the panel in a few days, so look forward to that! Overall, it went very well, and at the end there was some neat discussion in the audience and a few people came up to thank me personally.

After that, I hoped to hit up the screening of Blood Blockade Battlefront, which Rie Matsumoto and several dub cast members were to be present for. Unfortunately, the video room was running badly behind and after several minutes of waiting, I decided to go to a panel instead. I’ve always been very impressed with how well Sakura Con’s panels run on time, especially compared to other conventions I’ve been to, but I guess that doesn’t go for the video rooms. It’s a shame, since I didn’t get to attend Matsumoto’s first panel and was looking forward to this screening, but I did end up having a good time at the “Lost in Translation” panel, in which a professional manga translator and her husband, who works on the graphics, discussed the challenges of translating manga to English. They talked about how artful translations are generally not totally faithful, and faithful translations are usually clunky. The lines always take a little massaging to sound right in the new language, and the goal of the translator is to make the meaning the same, not a one-to-one transliteration. They also brought up different ways of translating sound effects, and the advantages and disadvantages of each method, from leaving them totally untranslated to changing the art completely. It was a fun, interesting panel, and Chrissy – the translator – is an adorable human being. 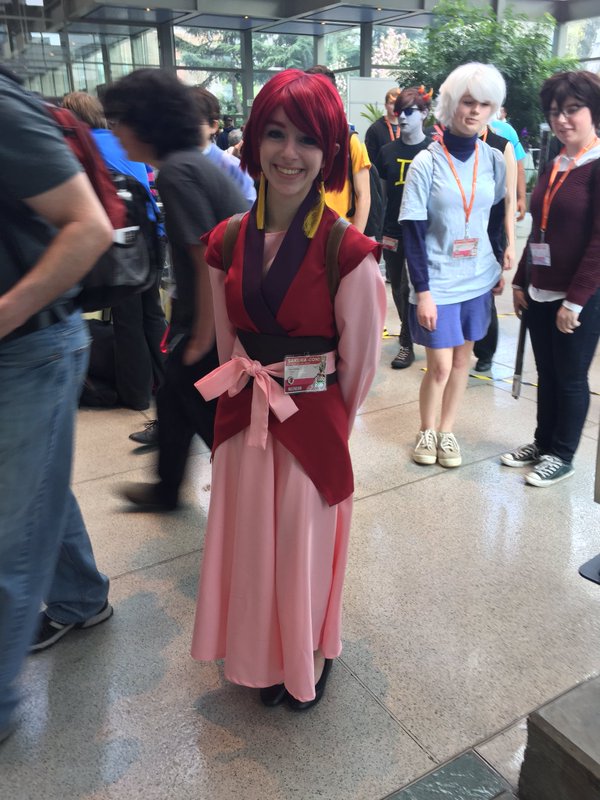 The final event of the evening for me was the panel “The Trial of Ikuhara”, as presented by three members of The House of Flying Needles cosplay group. It was a goofy format, putting Ikuhara on trial for “crimes against symbolism,” which amounted to a discussion of Ikuhara’s common symbols and themes across his three shows, such as flowers, sexuality, child abuse, and so on. I thought the theming was a bit gimmicky and was more about listing the symbols than really analyzing them and digging into the meat of it, but it was cute and fun and the audience all started singing “Zettai Unmei Mokushiroku” together. I confess I was a bit distracted because some Twitter shenanigans during it, which may have affected how much I absorbed!

And then it was Sunday – the final day of the con. My morning began with a round-table interview with Toshihiro Kawamoto and Rie Matsumoto, which I will post transcripts of shortly as well. From there, I moved on to the same two’s panel on “How to be a Content Creator”. The name was a bit deceptive – the discussion was mostly focused on how they adapted the character designs from the Blood Blockade Battlefront manga for the anime. Apparently, Matsumoto tweaked the head-to-body ratio and proportions with the aim of making the character designs appeal to women. It worked – according to Kawamoto, at a recent BBB event, almost everyone there was a woman, even though the manga audience is predominantly male.

After that, I had a couple more events I wanted to go, but at lunch realized I didn’t have my wallet and had to go home to make sure it hadn’t been stolen. I wouldn’t have time to go back to the con center before the remaining panels started, and thus my weekend came to an abrupt end.

But hey, at least I got to see Rie Matsumoto leave a Johnny Rocket’s. 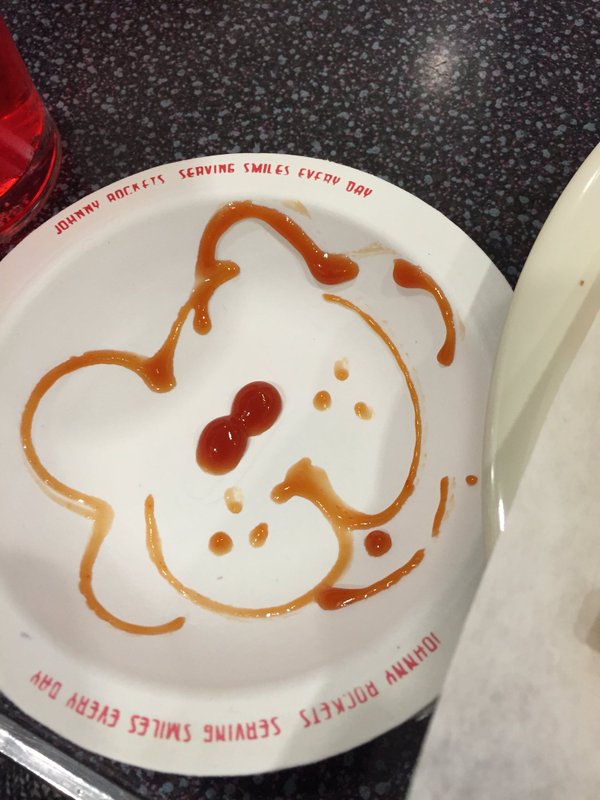