It seems like every other season, I tell myself that I’m going to find a new way to keep current on the blog, to find a way to discuss my thoughts and impressions of the shows I’m watching that week, and it somehow always falls through. It may be because life happens or I get busy, or because I decide that I don’t have something new to say about each show each week, or I decide I’m going to work on my backlog that season, or I just don’t have it in me to write 1000 words each about every show I’m watching. No matter what, I end up struggling to keep up with the shows that season.

So, of course that means it’s time to try again with a new format!

So here’s the new format: every week, I’ll post my thoughts, impressions, and predictions of each new episode that I’ve watched. If something relevant happens in the anime news, I may post my take on that as well. I’m not wasting my time sampling every new show; last time I tried that, it was exhausting and a lot of time and effort for not much reward. Instead, I’m only going to watch the ones that pique my interest and I think the readers of this blog will be interested in. Let’s see how this goes. So without further ado…

For better or worse, Izetta’s reputation preceded it. Crunchyroll went on a major publicity blitz with it, filling its blog with articles and its Twitter feed with shiny promotional art of two young women gazing at each other and holding hands high above the European countryside and riding guns like traditional ride brooms. It all looks lovely, but many fans who pay attention to staff in anime were much more wary. The show’s head writer is Hiroyuki Yoshino, a man whose major credits include Seikon no Qwaser, a fan service action anime about the power of breast milk; and Guilty Crown, a show infamous for its deeply militaristic, fascist, and misogynist themes. Knowing this, it was impossible not to go into Izetta: The Last Witch without being extremely skeptical.

Despite these ominous signs, the first episode was extremely strong. The character Izetta doesn’t show up until the last few minutes of episode – instead, the first 20 minutes focus on Finé, the princess of a small fictional duchy being threatened in a pseudo-World War II conflict. She is, as the other characters remark, a natural-born princess, but not the Disney variety. Rather, she is cool-headed, determined, intelligent, and willing to do anything in service of her country, whether it be offering herself up for marriage to a foreign prince or jumping from a train going over a trestle to escape Germanian soldiers. She is her tiny country’s only hope in the face of a great evil, and her only hope is the legendary White Witch. Her seiyuu, Saori Hayami, does an excellent job portraying her with a sort of quiet determination and composure totally lacking the sort of bubble-headed-ness and awkwardness anime heroines usually have to make them “likable” or “approachable”. The only frustrating part of her portrayal is the unnecessary shower scene where the camera lingers over her nude body. It’s fairly mild as far as fan service go, but it’s a frustrating and jarring departure

Izetta finally appears to rescue Finé from Germanian forces who hold her captive in an airplane. Symbolically, there’s a lot going on in those final few minutes. Izetta, when she recognizes Finé from a childhood memory, blows up the plane in an explosion of rainbow energy. When she sees Finé plummeting toward the forest thousands of feet below, she grabs a gun and flies down to catch her. Finé and Izetta’s bond, while still unexplained, appears to have romantic implications, from the rainbow explosion and their close, comfortable body language while riding on the gun. The gun, on the other hand, carries phallic implications of masculine, militaristic power. This is nothing new in terms of witches – the more traditional broom was once a phallic symbol itself. But while the broom combined masculine and feminine signifiers, the gun is pure masculinity. The gun comes most strongly into play at Finé’s most vulnerable moment, when she is helpless with no hope of escape. The strong, self-sufficient princess must be rescued by a masculinized figure, and she gives herself over. Although it’s too early to call either way, the imagery certain raises a lot of questions that I’m not sure if I’ll like the answer to.

You know, I’m getting pretty tired of this post-Madoka Magica world. Can we please get back to magical girl shows being about girls doing their best and succeeding instead of being about them suffering? According to the cold open of Magical Girl Raising Project, which shows the heroine standing alone and frightened in a room filled with bodies and splashes of gore, not yet.

Magical Girl Raising Project is a show without an original thought in its head. It combines the pseudo-cheerful first episode of Madoka Magica, the app-based selection system of Yuki Yuna is a Hero, the gamification of community service of Gatchaman Crowds, the ominous black-and-white mascot from Dangan Ronpa, and the youths forced to do battle of, well, lots of popular YA material but let’s just go with Battle Royale for now. The feeling is akin to every time Taco Bell announces a new menu item – it’s the same ingredients blended together in a slightly different way, and you’re not sure if there’s enough novelty to merit your cash. Outside those initial shots, however, there’s not much to point to anything wrong, pointing toward a “heel-turn” situation rather than a slow burn, the latter of which I find much more satisfying.

All that said, there was enough to hold my attention for the first episode. The dialogue between Koyuki and her friends feels natural enough as the three discuss the recent magical girl sightings around their city, even if they do look about ten years younger than the show claims they are. Most interesting is Koyuki’s childhood friend Souta, a boy who has felt the need to hide his love of magical girls since he was a small child. Now, he still loves magical girls, and was even lucky enough to be one of the one in 10,000 who was selected to become one. As he tells Koyuki, his transformation into a girl is complete, although he’s still a boy when not transformed. His comfort in a phenotypically female body, complete with visible cleavage, is a refreshing change from the humiliation most male characters react with when forced into a feminized role, and his discussion of how hard it is to be a boy who likes stereotypically feminine things feels sincere. 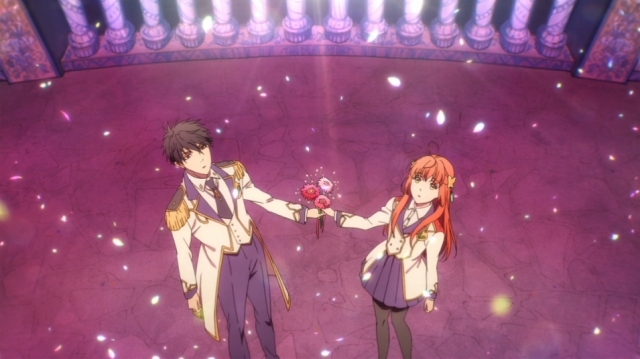 I’m just going to come out and say it: Magic-Kyun Renaissance is a fairly standard otome-style reverse harem. One girl thrown into an uncomfortable new environment surrounded by variously talented pretty boys? Yeah, I’ve heard it before. Kohana Aigasaki is a rare transfer student at Hoshinomori Magic Arts High School, where artistic talent is literally manifested as magical sparkles. Kohana, the daughter of a renowned magic artist, is a practitioner of ikebana, the traditional art of flower arranging, but has yet to produce her own sparkles. She finds herself placed totally randomly on the committee for the Summer Festa with a collection of the boys who she noticed on her walkabout. It’s not a premise that excites me, but it is a project helmed mainly by women, so I am taking somewhat more notice than I would normally for something like this.

As is standard for the genre, Kohana is an Ordinary Girl, thrown into a group of Extraordinary Men. Her inability to create sparkles using her magic art sets her well below the curve at this school, despite everyone’s high expectations of her due to her family lineage. Could she possibly succeed only because of the support of these beautiful young men? Oh, no doubt at all. It didn’t escape my notice that the first and only time she projects sparkles is when she offers a bouquet to a beautiful young man, a famously standoffish singer whose name I’ve already forgotten. Ikebana is also extremely feminine-coded, an art practiced almost exclusively by women for hundreds of years. Basically, I’m not really expecting Magic-Kyun Renaissance to break down any barriers, and will probably continue to reinforce the same romanticized gender roles and sexism as most otome games.

That said, it is a beautiful show, which is only fitting for a show about art. The animation and art design are gorgeous, all clean curving lines, bright colors, and fluid motion. Mitsue Yamazaki, director of Monthly Girls’ Nozaki-kun, shows off the same visual flair in a much less restrained setting. Veteran writer Tomoko Konparu also turns in a solid script, and I especially enjoyed the interaction between Kohana and her new roommate Juri. Even with a fairly silly premise, the strong female-led creative team of Magic-kyun Renaissance makes it worth at least a second look, even if not a third.