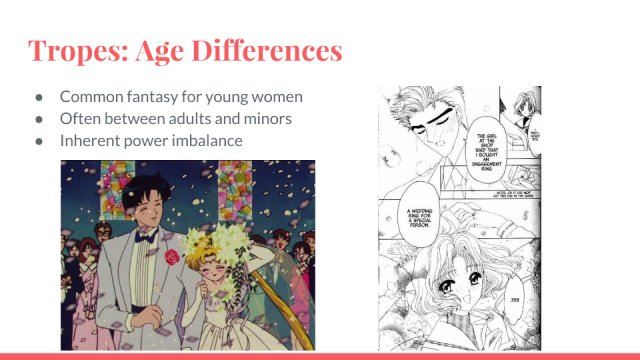 One of the things people brought up as something that made them uncomfortable was age differences. It’s a very common fantasy for young women, which is why it’s so common in shoujo manga. “Oh, this hot teacher… he’s so attractive… What if he fell in love with me?” And people generally mentioned Sailor Moon, because Mamoru is in college and Usagi is in middle school; and this particular couple in Cardcaptor Sakura, because she’s in elementary school and he’s her teacher. [audience groans]

It is a common fantasy, but there’s an inherent power imbalance here, and all the time you see stories about young women who end up sleeping with their teachers and it’s what they thought they wanted – and this is not victim blaming, it is 100% on the adults to not do it with them – but since they see these fantasies, and they find themselves in these situations, they don’t have the tools to get away. Once again, I want to emphasize, it is never the victim’s fault. I don’t want to come across like I’m victim-blaming, ever. 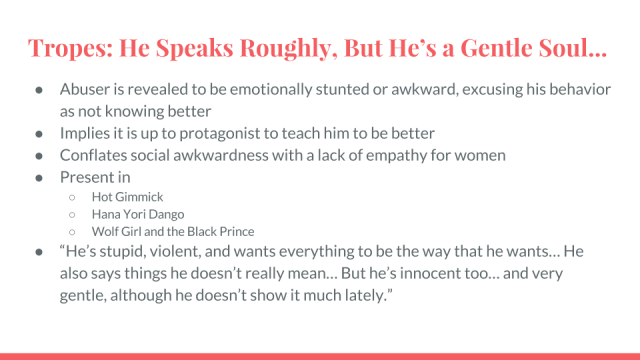 Another trope is, “He speaks roughly, but he’s a gentle soul”. Usually what you have is the guys are very emotionally stunted and very awkward, and he doesn’t know better. It usually implies it’s up to the girl to teach to be better, to teach him how to treat her. It also conflates social awkwardness with a lack of empathy for women – they’re awkward, therefore they don’t treat girls like people. You see this very heavily in Hot Gimmick, Hana Yori Dango, and Wolf Girl and the Black Prince. This is a quote from Hana Yori Dango: “He’s stupid, violent, and wants everything to be the way he wants, and says things he doesn’t really mean… but he’s innocent too, and very gentle, though he doesn’t show it much lately…” She says he’s violent and gentle in the same breath.

Here we see in Hot Gimmick, Ryouki is trying to figure out why Hatsumi is having some issues transitioning between the slave and the practice girlfriend and he thinks of it in equations, which means that if he thinks of things in equations, then he’s trying to apply rationality to feelings, which is not how it works, which means he’s awkward, and therefore it is endearing when he yells at Hatsumi and calls her ugly.

Another trope you see a lot is, “He’s bad, but someone else is worse.” Usually at some point early in the series, the girl will consider going to another guy, and oh, he seems nicer, but he’s actually much meaner. You see this in Hot Gimmick when Hatsumi meets up with her childhood friend and they start to date even though she’s Ryouki’s slave and it turns out he just arranged to have her gang-raped as revenge against her father for sleeping with her mother. Of course, in these cases, the main love interest always comes in and rescues the girl and that’s usually the point where she starts to develop feelings for him. He comes in and is like, “Oh, I’m the only one who can be mean to her,” and it makes her heart go doki doki. [audience laughter] This is a very common trope and it acts like abuse is relative and it’s not – if a guy is abusive, he’s abusing you and it doesn’t matter if there’s someone worse. You deserve better, you deserve someone who treats you right. 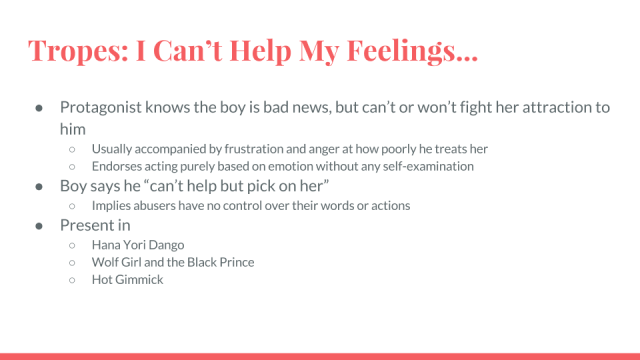 Another trope is, “I can’t help my feelings,” where the protagonist knows the boy is bad news, but she can’t or won’t fight her attraction to him. That teaches the lesson, if you’re in love with a guy, go for it! It doesn’t matter what else there is! It’s usually accompanied by frustration and anger at how poorly he treats her, but she listens to her affectionate feelings rather than the anger. On the other side of that, the boy usually says, “I can’t help but pick on her, there’s just something about her.” That also implies abuser have no control over their actions. Everyone acts purely on instinct. I understand that the teenage years are a confusing time where it’s hard to do things despite emotions rather than because of emotions, but once again it sort of creates this model for teenage girls that it’s romantic to go for a guy despite misgivings and that if it works out, it’s even better than going with the guy who treats you nicely from the start.

Here we have a couple of scenes from Wolf Girl and Black Prince. One is when she went on a date with this guy who was really nice to her, really sweet to her, and she tells him, “I’m sorry, I’m still in love with this guy. I’m still obstinately in love with him.” The other three frames are Kyoya talking about her, and he’s talking about how he can’t help picking on her because it’s so fun to get a reaction out of her. That’s not healthy. You shouldn’t want to make your partner upset. He says he’s just “living honestly.” If living honestly hurts the people around you, then find another way to live honestly. Either remove yourself from the situation, or live a lie. 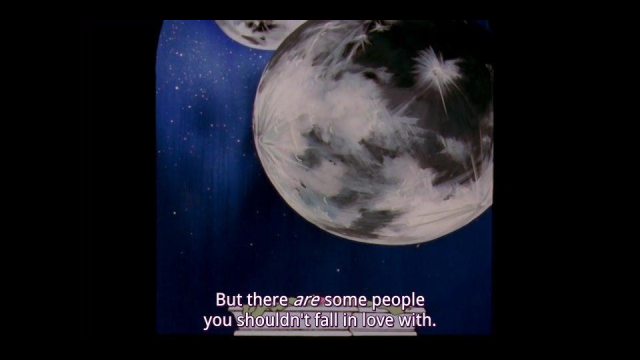 “There’s some people you shouldn’t fall in love with.” This frame is from Utena, a show I’m going to be talking about a little later, that confronts these themes and abusive relationships.

Next: Discussion of symptoms of abuse as seen in these series