I’ve been to Otakon three times before this year. During college, it was the yearly meeting point for my group of friends online. As I drifted apart from that group and lost the free time that being a college student on summer break brought, Otakon fell by the wayside. I had some great times in that Inner Harbor, but my time and money were demanded elsewhere. I figured I probably wouldn’t be back, but when they announced this would be the con’s last year in Baltimore – at least for the foreseeable future – I decided to make it work and have one last hurrah in the Charm City.

The weekend kicked off with Thursday’s free matsuri in the Inner Harbor, several blocks away from the actual convention center. I spent most of the day a few miles away, working on the Awesome Women in Anime panel with my co-panelist, Rose Bridges of Anime News Network. Eventually we did make it to the park, where the heat was absolutely sweltering even as the sun went down. The Lotus Juice/Shihoko Hirata set was late, since according to our friends, one of the earlier performers had run very long, and the previous performer was still going. I wasn’t too interested, but he did sing a slow rendition of the Pokemon theme song, which was pretty great. Lotus Juice took the stage after a while, and his performance had great energy, but I wasn’t familiar with most of the songs and I’m not super into hip-hop without specific context. He also mentioned that he grew up in New Jersey, explaining his perfect English. My interest picked up a bit when Shihoko Hirata took the stage, but they were beset with technical problems as the computer playing the backing track kept cutting off. It was frustrating, but it did lead to her singing Reach Out to the Truth with only Lotus Juice beatboxing as her backup and the audience singing along, which was actually really cool.

The general assumption for cons is that west coast cons such as Anime Expo and Sakura Con are best for Japanese guests and industry, while east coast cons like Otakon and Anime Boston have better fan panels. It’s certainly not a hard-and-fast rule, but with the industry presence in California and the greater proximity to Japan, vs. the northeast’s concentration of colleges and universities, it makes a lot of sense. It also lines up with my experience – while Sakura Con had some guests I was thrilled for, I often found myself with large swathes of free time when there were no panels that excited me. On the other hand, I attended only a single guest panel at Otakon this year, but my schedule was packed with fan panels. The majority of the ones I attended were great and well-researched, but there were a couple duds mixed in.

Girl Power: Feminism and Magical Girls was one of the first panels of the convention, held by Tumblr user otapleonehalf. Her presentation was intelligent and well-researched, citing information from several sources, including Japanese media feminist Kumiko Saito. She presented the concept of magical girls and their importance within social contexts such as the role media has in shaping our perceptions, historical female gender roles in Japan, and the increasing sexualization of its young protagonists. I won’t go into too much detail out of respect for her decision not to post her panels until she decides to retire them, but if you see this panel on your con schedule, I highly recommend attending.

Gen Urobuchi: Magical Girls, Riders, and Puppets, Oh My! had apparently been wait-listed until only a couple days before the convention, but they put on a decent presentation nonetheless. They postulated that, for all his reputation as the nihilistic “Urobutcher”, Urobuchi’s stories actually are largely hopeful. They supported their thesis through discussing the recurring archetypes that Urobuchi uses and their roles within his stories. Overall I thought they did a good job and presented their arguments well. Their slides had no text and I struggled with paying attention to a mainly verbal presentation, but most people aren’t sleep-deprived and already addled with an attention disorder, so that was probably just me.

Anime News Network was a basic Q&A that I attended mostly because I had a number of friends sitting on the panel. They did a great job! Good job, friends. Not much else to say about that one.

Women in Anime was the sole guest panel I attended, populated by voice actors Caitlin Glass, Stephanie Sheh, Alexis Tipton, Lisa Ortiz, Alyson Leigh Rosenfeld, Sarah Natochenny, and Haven Paschall – a mix of veterans and newcomers, all speaking about how they feel about women in anime. I was nervous when they revealed they didn’t have a planned presentation and that the panel would be entirely Q&A, but the audience did a great job asking intelligent questions, and the panelists obliged with opinionated answers that warmed my heart. At one point, an audience member asked how they felt about the word feminist, and all of them spoke out in strong support. Other interesting moments included: Glass saying that when she gets the chance to play young boys, she feels free in a way she rarely does otherwise, since every female character is drawn mainly to appeal to main fans; Sheh talking about how she ended up in voiceover in part because casting directors don’t know what to do with a 4’9” Chinese woman; how Lisa Ortiz has occasionally worked with the producers to shift some lines, because little girls will remember what the show taught them as they grow up; and calling out why fan service-oriented shows are only specifically categorized as fan service shows, instead of by their primary genre, when they’re for women. “Free is about swimming. Do you swim with your clothes on?”

I don’t have too much to say about Anime’s Craziest Deaths. Daryl Surat of Anime World Order hosts this panel every year, and it’s mostly clips of, well, very violent deaths in anime. It was fun, but the couple noisily making out in front of me was quite distracting.

Hayao Miyazaki: A Storyteller’s Journey is a classic Study of Anime panel, and one he’s obviously done many times before. He traces the themes of Miyazaki’s films through the lens of what was going on in the director’s life when he made each one. It’s fascinating stuff and a great look into the psychology of one of the most influential voices in anime. BUT there was a cringeworthy moment where a man climbed onstage singing and publicly proposed to his girlfriend. I know not everyone feels this way, but I hate public proposals. Absolutely despise them. Good presentation, otherwise.

Rose and I did our Awesome Women Making Anime panel, and I think it quite went well considering our relative inexperience as panelists and how unrehearsed we were. There was a heart-stopping moment when we didn’t have the right dongle to connect the Macbook to the projector, but the tech guy found one in time. The panel ran about 20 minutes short, so next time we’ll be able to expand it a bit.

That’s Gay! Anime and Manga for the LGBT Audience got off to a bit of a rocky start when someone yelled and stormed out of the room when the two panelists, a pair of women in a relationship, admitted that they were not trans and thus not authorities on the topic. After that, however, it went great. They presented sections on gay men/yaoi, lesbians/yuri, transgender, and asexual representation; each section was divided into stereotypes, tropes, target audience, early exampls, mixed bag representation, and progressive representation. Each segment was well-thought out and covered the history and social context well. Some of their recommended series include Yuri Kuma Arashi, Whispered Words, and Wandering Son.

Fractured Persona: Identity in the Persona Games was the second Study of Anime panel I attended that weekend, and I believe it was their first time presenting it. To be honest, I was a bit disappointed by it. Persona 4 took up the majority of the panel’s time, which I was fine with – it’s by far the most psychologically complex game in the series and touches on issues of identity in ways the previous ones do not. However, while Naoto and the male characters get discussions of their gender identity, sexuality, and so on, Chie and Yukiko were discussed only in reference to the archetype of “the goddess”, which Dunbar seems uncomfortably obsessed with, and who their personas represent. While that’s all well and good, it had an oddly objectifying feel to me – how the others were defined by their arcs and who they are, but Chie and Yukiko, who are just as complex and interesting as humans as Yosuke and Kanji, who struggle with their own identities, are defined by what they represent. Rise barely even came up! It was a scattershot approach and I wish he had picked one or the other.

Anime Gets Trippy: Psychadelia and Surrealism in Anime was a late-night, adults-only panel and I was half-asleep for most of it. It presented some truly bizarre clips from series like Space Dandy, Belladonna of Sadness, and Cleopatra, the latter of which included unsettling animated talking heads superimposed on live-action bodies. The audience was pretty obnoxious, including the one guy who yelled, “WHAT?” when a vagina transformed into a flower on-screen. It’s a pretty common symbol, my dude.

I regret dragging myself out of bed early to see How Meta Destroyed the Anime Industry, since that panel was a complete disaster. I don’t remember too much about it, since the presenter was utterly unmemorable, but mostly he talked about the history of Gainax, showed Daicon IV, and then transitioned straight to some vague discussion of self-referential moe and quotes from Hideako Anno disparaging it. The presentation was hopelessly out of date – apparently, he made it in 2009 and hasn’t really updated it since. It’s a shame, because it could have been an interesting topic, but instead it was dull and dry and didn’t come close to covering what it promised.

Answering the Call to Adventure: the Road to Becoming a Magical Girl was yet another Study of Anime panel, and fell somewhere between the Miyazaki panel and the Persona panel quality-wise. It still had a healthy dose of “The Goddess!” but I have to admit, it did make sense in this context, especially when discussing shows such as Madoka Magica. The panel discussed magical girl mythology in context of Joseph Campbell’s influential hero’s journey cycle, which is a subversive concept considering how unconcerned Campbell was about women other than their positioning relative to the male hero.

Socially, this was easily the best con I’ve been to. As a teenager, my con-going days were exciting and fun, as I often went with large groups of friends unsupervised by adults, but beset by drama typical of that age. As I grew older, they became increasingly subdued and I often found myself going it alone while my lower-energy friends begged off, but they rarely ended in tears. I was ready to accept the quieter cons a side effect of my age, but this year’s Otakon was truly magical. This was in no small part due to the companionship of Rose, whose congoing style is very similar to mine, and to the many other amazing people I met who are as passionate about anime as I am, if not more. So, if you’re someone I spent time with this year: thank you, and I hope to see you again next year! 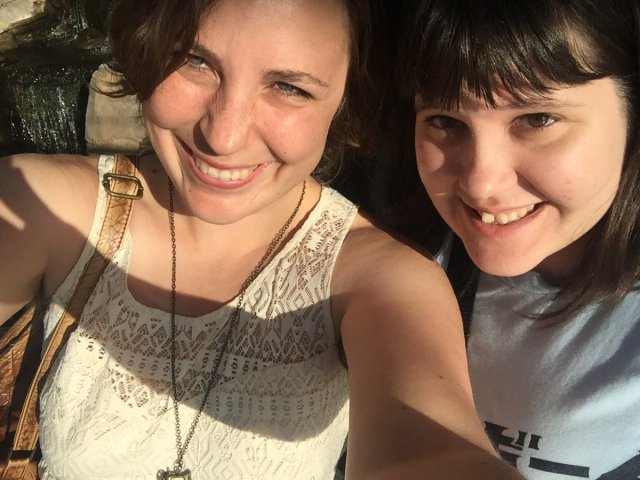