It wouldn’t be far from the truth to describe Kobayashi’s Dragon Maid as reverse-isekai show – Tohru has, after all, been sent to another world and must learn to live in a world where the rules are entirely different. However, its slice-of-life nature separates it from the likes of Fushigi Yugi or Re:Zero, where quests and other plot demands direct the flow of the narrative. Rather, Kobayashi’s Dragon Maid has a gentle pace, portraying the everyday life of Kobayashi, Tohru, and their friends with plenty of bawdy comedy and only a few occasional hints at a greater plot. The slice-of-life approach creates opportunities for quiet contemplation, even under the fan service and sexual jokes, and delivers a charming message about adapting to a new life in a new culture and found families.

One of the most striking things about the show is how it accurately portrays culture shock and the struggle to adapt to life in a new culture. I was amazed at how often my own experiences with life as a visible foreigner were reflected throughout the show, albeit with plenty of exaggeration. Tohru comes from a completely different culture, one that resembles classical sword-and-sorcery fantasy stories where humans and dragons do battle through high-powered magic. Needless to say, she’s ill-equipped to handle modern Japan’s harmonious city living.

Simple things like laundry, stoves, and personal hygiene are completely different from what she’s used to, and Kobayashi scolds her when she does something that’s opposed to her own sensibilities, like doing laundry by chewing it or serving a dinner of dragon tail. There’s nothing wrong with what she’s doing, necessarily – her saliva removes stains and her tail tastes, quote, “creamy and delicious” – just that they are deeply opposed to the mores of her new home. If she hopes to ever adjust to life in Japan, she must learn how to do things the Japanese way. 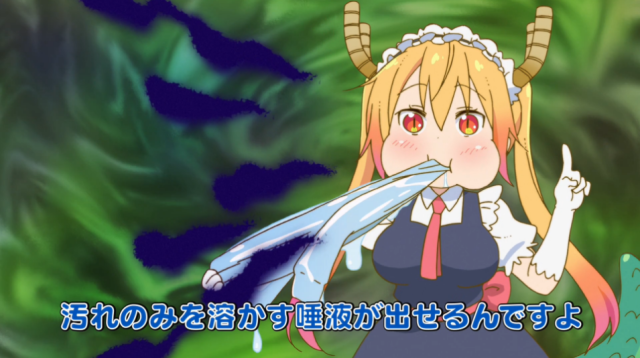 Real-life foreigners run into similar obstacles – things like eating while walking or wearing shoes indoors aren’t wrong, but they are embedded in Japanese culture and violating those mores is a huge faux pas. Pragmatic concerns abound as well, such as sleeping on a futon, having furniture low to the ground, or the lack of traditional ovens. To live comfortably in Japan, these are all things that you simply have no choice to adjust to, or else your life will be difficult and expensive.

Certain things are taken for granted when you grow up in a culture, but transplants must figure out how to fill in the gaps and make calculated guesses about the real purpose. When Kanna, a young dragon about the equivalent of eight years old, arrives in the human world, Tohru shows her around and introduces her to aspects of modern human life. Cars are a popular example in “fish out of water” stories; outsiders often mistake them for sentient creatures. Tohru, on the other hand, proudly explains crosswalks to Kanna and how humans operate vehicles, but comes up short when Kanna asks how exactly they function. Tohru must extrapolate – she knows humans need licenses, but doesn’t know where they come into play. Humans of our world, on the other hand, may not know exactly what makes a car work, but you know they’re powered by gasoline and at some point internal combustion comes into play. Tohru, coming from a universe where it is very real, naturally assumes magic is involved in how cars operate.

When they hear a man talking on the phone using discourse markers such as “right” and “that can’t be”, Kanna asks what he’s saying. Tohru answers, “Magic words. You can get through most conversations using them, so try to remember them.” In real life, discourse markers are essential to any language learner trying to get by, because they’re so useful in conversations where you may get the gist of what’s being said, but not enough to really converse, or can’t summon the words to respond in greater detail. They’re so useful for basic social interactions that calling them “magic words” isn’t too far from the truth!

Occasionally, the dragons stumble on something they can’t explain, and without Kobayashi present they’re forced to try and figure it out on their own. At one point, Tohru and Kanna find a seesaw in a park. Tohru, unwilling to tell Kanna that she just doesn’t know, makes a wild guess and calls it a “training device for catapults”. To someone used to living in Japan, that is wildly absurd. There’s no use for catapults, a complete nonentity in modern life, but to Tohru, whose life has been defined by medieval-style warfare, catapults are totally normal. Similarly, when shopping for stationery supplies for Kanna to start school, Tohru assumes the stamp is a “tool for branding slaves. You use it to mark your property.” The second half isn’t too far off, but the first half is clearly colored by her old home. Japanese convenience stores and houseware shops are stuffed to the gills with products totally unfamiliar to westerners; although it’s often possible to guess what they’re for from the packaging, occasionally it’s nearly impossible. The beauty section can be particularly disorienting, since Japan’s beauty standards can differ fairly wildly from our own – if pressed, I would probably come up with similarly inaccurate explanations for some of the things I saw. 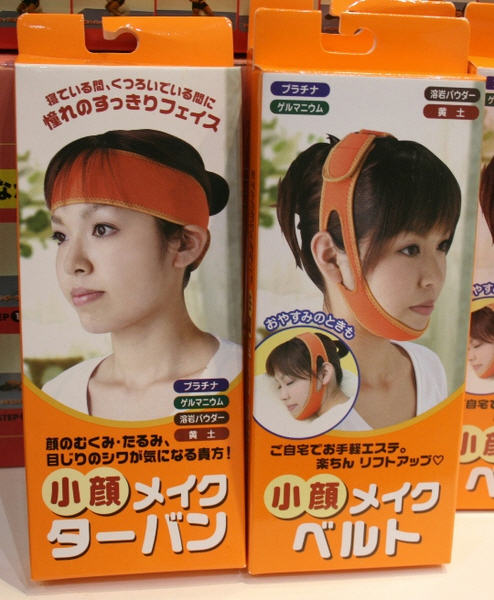 As the series progresses, the sense of “foreignness” surrounding the dragons, particularly Tohru and Kanna, evolves. Tohru and Kanna didn’t choose to come to Japan – Tohru fled from battle, and Kanna was exiled by her parents. Their friends Lucoa and Fafnir move over for a change of pace and out of curiosity. Tohru’s old enemy Elma comes voluntarily, but ends up trapped and unable to return home. Likewise, expatriates come to Japan for a variety of reasons: work, study, love, money, and so many more. Many move back to their home countries, but a few choose to stay for the rest of their lives. Among those few, most feel like outsiders back home. Japanese culture may not always be a perfect fit, but neither was their home culture. Tohru comes from a place of trauma – she was mortally wounded when she arrived and expected to die. She has nightmares about the battle that nearly killed her, and hates department stores because they remind her of human fortresses. She’s told by a teary Kanna that everyone back home thinks she’s dead, and Tohru gently tells her that she doesn’t intend to go back – her home is with Kobayashi. Tohru’s reasons for staying are multilayered, combining reasons to stay with reasons not to go home.

Tohru at first is disdainful of human culture – she idly thinks, “Humans may gather together, help each other, and accomplish many things, but their civilization could be easily destroyed by dragons. So I think dragons are better.” Her standards for superiority are based on raw strength, since that’s what the culture of her world places a premium on. Similarly, Japanese people often pride themselves on their society’s ability to maintain harmony, while people from other parts of the world may find it conformist and oppressive.

As the series wears on, however, she grows increasingly comfortable with the values of modern Japan, and her views begin to reflect that. In the first episode, she is prepared to murder Kobayashi’s friend Takiya because she is jealous of his friendship with her and because she finds him annoying. She tries to clean by destroying Kobayashi’s possessions with cleansing fire, and licks Kobayashi’s dirty laundry. A few episodes later, she’s used enough to modern day accoutrements that she’s helping set up Fafnir with an apartment and making identification for him. Fafnir is discomfited with her transformation, telling her, “You resemble them too much.” While I’m sure that most foreigners living in Japan aren’t suppressing homicidal urges, they do struggle with elements of everyday life that seem strange and nonsensical. Internalizing core concepts like saving face and maintaining harmony don’t come easily as an adult, and trying and failing at them is awkward and uncomfortable. Paying for everything with cash, endless bureaucracy, and using fax machines to communicate are just a few features of everyday life in Japan that foreigners struggle with.

Kanna is young; her mind and behavior are more flexible and adaptable, while Tohru is a fully-grown adult and her mores are much more deeply ingrained. But, much like Tohru’s growing ability to function in modern society, these cultural quirks become more and more natural until they fade into the background like the rest of everyday life. Eventually, going home feels just as strange as adjusting to foreign customs once did.

One final element about life as a foreigner in Japan – one that the show gets so, so right, and that I assume applies to expatriates in any country – is the absolute necessity of having a space and friends who you can cut loose with. Tohru is, and will always be, a dragon. She may live among humans and even pass as human if you don’t look closely, but she will never be human. She is singularly devoted to Kobayashi and is committed to spending her life with her, but she also needs time to relax from human standards and be a dragon. This is where her friends come in – the moments where she can “play rough” with Kanna, Lucoa, and Fafnir, without worrying about human frailty, are some of the show’s most joyful moments. Playing a dragons-only game of dodgeball, frolicking in a wide, grassy field with Kanna, and racing at the beach are essential to Tohru’s joy and well-being.

As much as I loved my Japanese friends and, for a semester of college, host mother, I also treasured my occasional outings with my American friend to places like Outback Steakhouse and watching pirated episodes of 30 Rock. Living in another culture and navigating its mores that do not come naturally is stressful, so to cut loose and be unabashedly American without worrying about being judged relieved weeks of the slowly accumulated stress that comes from trying to stick out as little as possible, even though no matter what you do, the very act of existing in public garners stares and whispers. This feeling is eloquently summed up when Tohru encounters a group of beings from her world at Comiket, using the presence of cosplayers to hide in plain sight. One says, “I normally live disguised as a human, but coming to events like this lets me enjoy time in my real form.” When Tohru does the same, unfurling her wings and tail, it’s almost cathartic in its sense of release. 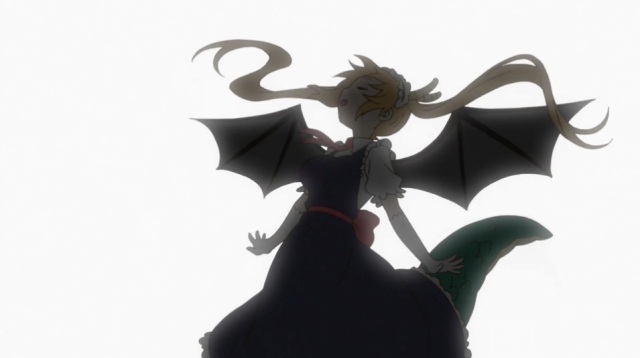 Anime’s portrayal of foreign characters is usually pretty one-note: blonde, blue-eyed, and busty, overly-touchy, and loud. Tohru, on the other hand, is a member of a fictional species from a fictional universe, whose culture shock is exaggerated and broadly written. However, her struggles to adjust and acclimate are written with a compassion that even human gaijin rarely merit. Tohru’s fish-out-of-water struggles resonated with those two years of my life more strongly than any other story has.