It’s only really assault if he’s a bad guy

This week, Black Bird and Black Rose Alice have a common thread, other than the word “black” in their titles: the presence of a villain.

In Black Bird, Misao is assaulted by Sho’s older brother, who acts with the intention of raping then murdering her to gain leadership of his clan; in Black Rose Alice, Alice’s former student and victim lover finds her and turns into a full-blown stalker after become obsessed with finding the connection between his dead rapist girlfriend and this mysterious foreigner. Their actions aren’t too far off from the romantic leads, but since they intend to harm rather than show their “passion”, they’re shown in a negative light. Sho specifically comments that, despite his sense of competition with Kyo, he was never able to fall in love with Misao. So while both seek to control Misao, Sho’s lack of love makes him inexcusable.

When putting together this week’s column, I weighed whether or not to give points for Sho and Kyo’s actions. In the end, I decided not to. This is about how series romanticize, justify, and excuse abusive behavior, and if a villain is perpetrating it, that’s a beast of a different color. There’s an argument to be made that they eroticize violence, but that’s not really the discussion I’m having here. That’s a discussion that, I feel like, takes a lot more in-depth knowledge about human sexuality and paraphilia than I possess, so I’m going to table that one. 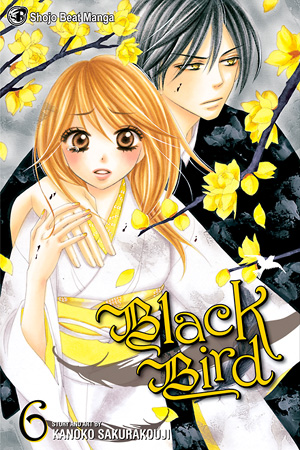 Misao and Kyo have traveled to the tengu village to end Sho’s claim on the leadership of the clan once and for all. Misao knows there will be bloodshed, and things will only get worse if the battle is drawn out.

But her attempt to help is thwarted by a cunning trap. Locked in with Sho with little hope of rescue, Misao has a terrible choice to make–betray Kyo or die a horrible, painful death! (summary by Viz)

That’s right, Black Bird only got TWO points this volume! Kyo and Misao spend the majority of the volume separated, and when they do meet, it’s actually quite touching with no sexual harassment, threats, or violence. Rather, Misao spends most of the volume with Sho – one of the points comes from the blatant use of the trope, “He’s bad, but someone else is worse.” Sho visits plenty of sexualized violence on Misao, but there’s no dressing up of it as an act of love. It’s not exactly to my taste, but I also have no illusions that eroticized violence is the main appeal of Black Bird to its intended audience – at least they’re calling a spade a spade.

Misao, as well, gets some nice moments of growth in this volume. Rather than being a helpless victim, she takes the initiative to think of and carry out a plan all on her own. It’s a nice change from the series’ previous pattern of her stumbling into trouble, needing to be rescued, and being punished by Kyo, and I do hope to see more of it.

Flash-forward to 2008. In Tokyo, Alice thinks she has fully adapted to her role in Dimitri’s nest and is carefully considering which vampire to propagate with. But when the man she loved she was Azusa shows up one day, her carefully constructed acceptance starts to crumble. (summary by Viz)

I seriously considered leaving that as the whole write-up for this volume. Like I discussed previously, he’s sneaky and manipulative – even when he’s acting like Alice hurt him, I get the sense that he’s maintaining total control over the situation. After their every interaction, Alice is left crying and confused, while he keeps his equilibrium. At one point, he slaps Alice across the face and tells her not to “make [him] do that again,” blaming her for his violence. The other characters scold him for it, but the volume ends with a tearful separation and admissions of undying love between the two.

Like this week’s volume of Black Bird, this installment of Black Rose Alice includes a villain – Koya, the student she had an affair with before her death. He’s a fascinating character, twisted by the years of grief and the damage done by an obsessive love affair with a grown woman before he was emotionally mature enough. There’s a sense of what could have been, had they had a chance to wait until he was an adult, giving the whole things a sense of melancholy on top of his increasingly chilling behavior as he moves from asking her pointed questions designed to poke holes in her cover story to full-on stalking. It’s a great subplot, one that was truly harrowing to read, but it was marred by Mizushiro’s rather dim view of gender relations and romance.

Shizuka makes a shocking announcement at her birthday party, which could create some very intriguing possibilities for Tsukushi. Could Tsukushi possibly have Rui for herself? Tsukasa, clouded by the sound of flying planes, asks Tsukushi out on a date that goes very, very wrong. (summary by Viz)

What’s this? Another uncharacteristically low score this week?

After his aborted rape attempt in the previous volume, Doumyouji is relatively well-behaved this time around. He’s realized his feelings for Tsukushi, so he’s having a go at treating her decently – the two even go on a date, which is leaked to the student population. They start fawning over Tsukushi, which she realizes is a house of cards that could fall down any second – she just wants to take some time to enjoy not being treated like dirt. This is yet another illustration of the terrifying social capital Doumyouji wields. Not only does he never suffer any consequences for his actions, but the rest of the school mindlessly follows his actions. We’ve seen this in previous volumes – much of the harassment Tsukushi faces comes not from him personally, but from the rest of the students on his incitement. She knows how volatile he is too – it’s not a question of if, but when things will go sour again.

Frustratingly, Tsukushi has unwittingly become one of the people willing to let Doumyouji live without consequences for his actions. Sure, she may yell and punch him in the moment, but the moment he treats her with a modicum of respect, she’s willing to completely forgive and forget as her heart goes doki doki. There is no honest confrontation of how terribly he’s treated her, of the violence and terror she went through directly because of him, and it’s really doing disservice to her character. She’s treated within the narrative as the only person willing to stand up to his bullshit and that’s what earns his respect and affection, but she really only ever advocates for herself on a very shallow level.

Miku confessed her love to Kyohei and was rejected. Despite that, the two have gotten closer lately. But now the mysterious Kudou arrives on the scene! He entices Miku to go on a date with him by promising to tell her “Kyohei’s secret”… (summary by Viz)

Damn, guys. This is actually a really cute series.

This volume sees Miku and Kyohei getting together, and the reason he hesitated to give her his answer turns out to be pretty sweet! She didn’t have to do a bunch of stunts or jump through hoops or hatch schemes to win him over; the reason he took so long to go out with her is he wanted to be sure of his feelings, so that they could be in a relationship on an equal footing instead of one where she’s super into him and he’s not as into her. Mangaka Nana Haruta actively establishes the power balance within the relationship with little patience for the kinds of hijinx and misunderstandings that tend to dominate romcom shoujo. They also jump straight to the first kiss without a ton of waffling, which was nice.

This volume does earn two points – one of Miku’s friends has an adult boyfriend, and Kyohei grabs Miku in way that, while it wasn’t violent necessarily, would have made me uncomfortable if I witnessed it in person.

At an abandoned military base, Zen finally finds the truth about his identity. Now that he knows who he is, does that mean his destiny is written in stone? Conspiracies, espionage and attempted coups d’état all tie into the conclusion of Aya Kanno’s intense tale of lost identity. (summary by Viz)

Aya Kanno wrote that she originally planned Blank Slate as a long-running series, and I wish I lived in the timeline where that had been the case. The second part, which delves into Zen’s past, explores the characters in greater detail, which would have been great if it hadn’t been all the male characters standing around revealing their pasts and discussing imperialism in a shallow sort of way. There’s 0 points because, well, there’s no relationship abuse or assault, but the female characters get sidelined and in the end, one of them ends up fridged for the sake of developing Zen in a story we will never see unfold. The men are beautiful and I certainly enjoyed looking at them, but in the end, Blank Slate is just as empty inside as its main character.

But hey, at least nobody abuses their girlfriend.

Dawn of the Arcana vol. 1

Princess Nakaba of Senan is forced to marry Prince Caesar of the enemy country Belquat, tantamount to becoming a hostage. While Caesar is pleasing to the eye, he is also selfish and possessive, telling Nakaba outright: “You are my property.” With only her attendant Loki at her side, Nakaba must find a way to cope with her hostile surroundings, her fake marriage…and a mysterious power! (summary by Viz)

We have a new record, y’all! Prince Caesar is an absolute bastard and incredibly abusive to Nakaba. He mocks her, threatens her, pulls her hair, demands sex, treats her as property… he is physically, emotionally, and sexually abusive. He’d make a great villain… but I know from cheating and peeking ahead that the two of them will fall in love and have babies or whatever. It’s too bad, because Dawn of Arcana is exactly my kind of shit and I know that this first volume will color my feelings on it for the rest of the series.

Nakaba is my kind of heroine, as well. Her lifetime of isolation due to being a princess with red hair in a world where royalty traditionally has black hair, as well as coming from an oppressed nomadic tribe, has put a lot of steel in her backbone. Even in a situation as dire as the one she’s in, she is clever and stands up for herself – not fearlessly, but with the kind of courage that would have made teenage me fall head over heels for the series.

4 thoughts on “Abuse in Shoujo by the Numbers: Week 6”