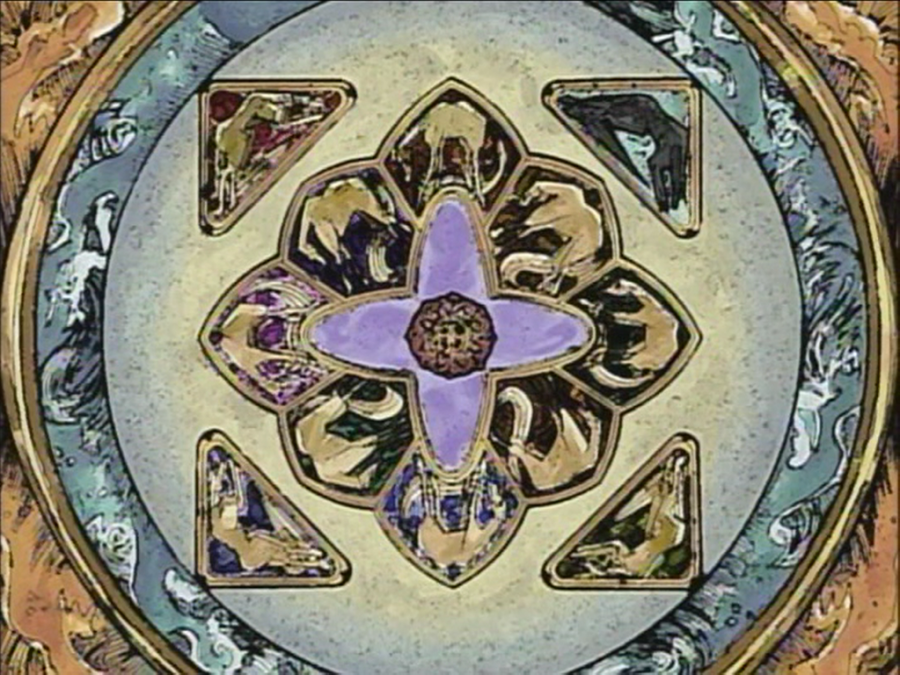 There’s no denying it: isekai is the genre of the moment in Japanese nerd culture. The loanword identifying the genre literally means “different world”, and it features a protagonist from our own world suddenly finding themselves trapped in an alternate world, usually one dominated by Western fantasy tropes. The trend reached the US in the early 2010’s with Sword Art Online, with its protagonist Kirito trapped in an MMORPG. Isekai are generally adaptation of light novels, where they are so prominent that last summer, a short story contest banned entries featuring alternate worlds. Like most light novel anime, they’re usually aimed at young men already immersed in the genre, and their protagonists tend to have a degree of self-awareness about their situation.

Despite their recent surge of popularity, isekai series have been around for quite a while. Recently, I stumbled on an article that claimed that the genre barely existed until a 1983 children’s show called Manga Aesop Monogatari and the anime adaptation of Inuyasha, which began in the year 2000. This article is, to put it bluntly, dead wrong. One of the earliest examples of the genre is Crest of the Royal Family, a 1976 shoujo manga that is still running to this day. Inuyasha may have been a breakout hit, but isekai anime and manga thrived during the 90’s. US fans didn’t have a name for it at the time – we generally referred to it as “‘trapped in another world’ anime”. The main difference between isekai then and isekai now is the intended audience – 25 years ago, it was a staple of the shoujo demographic, rather than today’s escapist playgrounds for young men. Ordinary young women were pulled into alternate worlds where attractive young men told them they had a special destiny to fulfill. They went on grand adventures and usually – though not always – fell in love along the way.

To be clear, I’m not railing against male-oriented isekai or saying that it took anything away. Rather, I think it’s important to recognize the genre’s roots and the role young women took in shaping one of today’s trends. I’ve listed the the anime and manga series that dominated the 90’s and left their mark on thousands of young female fans.

From Far Away by Kyoko Hikawa ran in Hakusensha Lala magazine for an impressive 11 years from 1992 to 2003. Its protagonist, Noriko, is an ordinary schoolgirl with a fascination with the fantastical, due to the influence of her sci-fi novelist father. An explosion sends her into a world of swords and sorcery, inhabited by dragons and monsters. Kyoko doesn’t magically understand the language of this world, unlike most of her counterparts in the genre. Her lack of understanding prevents her from learning that she is the Awakening, a legendary being from another world said to bring strife to this universe. From Far Away, with its dewey-eyed, spirited heroine and taciturn, mulleted swordsman romantic lead, has a lot of early 90’s shoujo charm. 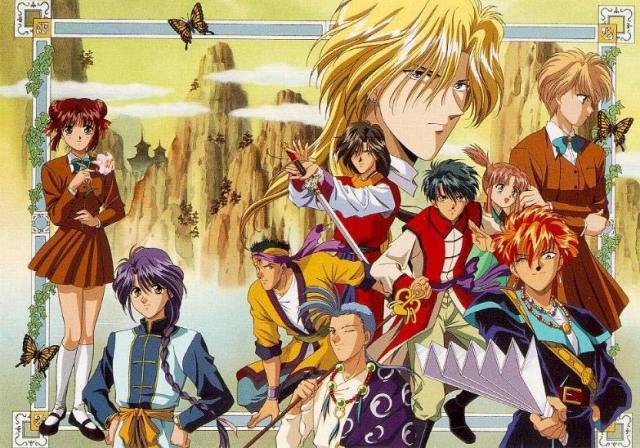 Fushigi Yugi started as a manga, running from 1992 to 1996, which was adapted into a 52-episode anime in 1995. It features Miaka Yuki, a none-too-bright middle school student studying for her high school exams, who is pulled through a library book into the magical Universe of the Four Gods. There, she becomes the Priestess of Suzaku and must gather the seven celestial warriors to save the kingdom of Konan. The series was hugely influential both in Japan and in the US; here, it was one of the first true shoujo anime to make a dent in the market, and inspired two spinoff manga, three OVAs, a series of light novels, and a stage play. The ancient China-inspired setting and political intrigue created a sense of adventure and excitement, while the reverse harem of beautiful men and melodramatic plot twists created an appealingly soap opera-like drama. Unfortunately, the series has aged poorly, with a lot of reliance on sexual assault and poor decision-making, but its importance in the 90s was undeniable.

Twelve Kingdoms started as a series of light novels in 1992 and was only adapted into anime in 2002. It tells the story of Yoko Nakajima, a Japanese girl struggling to fit in. One day, a strange blond man appears, bows to her, and sends her off to another world on the back of a birdlike monster. When Yoko arrives, he is nowhere to be found, and she must survive alone in a strange and hostile world. Of the series on this list, Twelve Kingdoms appeals most to my feminist sensibilities. Rather than focusing on romance, the novels focus on Yoko’s psychological state and building up the universe. She is also not the sole protagonist; each novel focuses on different characters whose stories are interwoven together. Novelist Fuyumi Ono uses the alternate world to lightly explore subjects like immigration, sexism, and racism. The anime adds new characters who make the journey with from Japan along with Yoko. The change makes sense, since the first book is so driven by her state of mind and that’s hard to translate into visual media, but I prefer the isolation of the books.

Magic Knight Rayearth is the first successful female-centered manga series by the legendary manga group Clamp. It features Hikaru, Umi, and Fuu, three ordinary but conveniently color-coded Japanese schoolgirls who are pulled into the world of Cephiro in order to save the Princess Emeraude, the “Pillar” who prays for the world’s peace and safety. The three girls must revive the Rune Gods, giant mecha powered by the strength of their hearts. Although their popularity has faded somewhat, Clamp’s status was legendary in the 90’s for their lush artwork. The first part of Magic Knight Rayearth suffers from the breathless pace and convenience-driven plotting that many other Clamp manga do, partially because of an intended audience of elementary school and older, but the ideas behind it are strong and the sequel series does an excellent job dealing with the emotional fallout of the first half’s traumatic ending. The series was hugely successful and inspired a 49-episode anime series, a three-episode OAV retelling, and several video games. 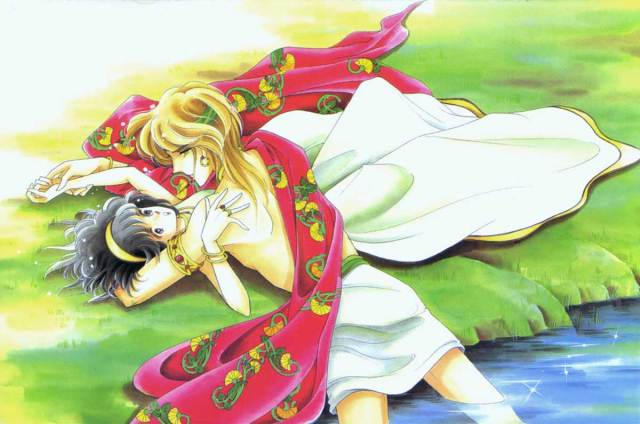 Red River debuted in 1995 in Sho-Comi magazine and ran for seven years. It tells the story of Yuri, an ordinary Japanese schoolgirl (are you sensing a pattern here?) who shortly after her first kiss, starts seeing arms reaching from bodies of water to pull her in. Eventually, the arms manage to pull her into a puddle and transport her to Hattusa, the capital of the Hittite Empire in bronze-age Anatolia, to be used for human sacrifice. One of the things that make Red River remarkable is rather than a totally fictional setting, the story takes place in a fantasized version of the region that would eventually become modern-day Turkey, with a strong eye for historical detail. Sho-Comi, which ran Fushigi Yugi concurrently, has come under fire for the sexual content of its manga, despite 25% of its audience being under age 13, and Red River is considerably steamier than the other series listed in this article. However, the sex is entirely consensual, though I may be misremembering. Yuri’s strength lies in her adaptability, her will, and her ingenuity, making her a heroine that I truly enjoyed. 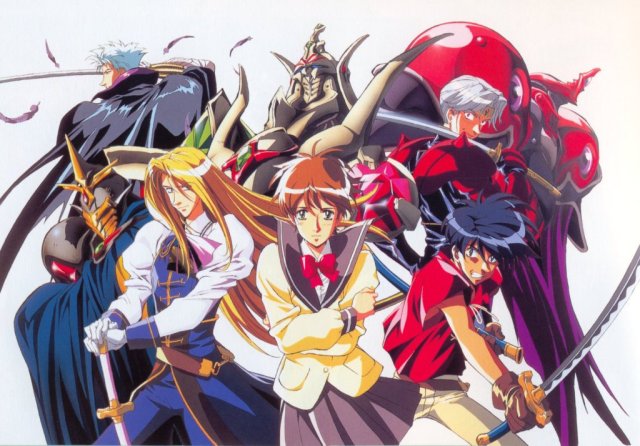 The Vision of Escaflowne isn’t strictly shoujo, but its strong appeal to a female audience makes it close enough to count. Hitomi, the heroine, runs track and reads tarot with unusual accuracy. When a boy fighting a dragon interrupts her confession to her crush, she is transported along with them to a world called Escaflowne, one that refers to Earth as the “Mystic Moon”. Escaflowne has a fascinatingly troubled production history; Shoji Kawamori, creator of Macross, wanted to create a similar mecha series using fortune-telling in place of pop music. The series was originally planned by director Yasuhiro Imagawa as a 39-episode shounen series with a busty, air-headed female lead for fan service and dramatic mech battles. When Imagawa left to direct Mobile Fighter G Gundam instead, the series was put on hold until they brought Kazuki Akane to replace him. Akane decided to go with a more shoujo-oriented style, with an intelligent and confident heroine, a focus on character drama and interaction, and bishounen-style male designs. Unfortunately, the series had to be cut to 26 episodes, but managed to retain its engrossing story and was considered an instant classic. Two manga versions exist: a shounen one based on the original concept and released before the anime version, and a shoujo one that bears more resemblance to the final product. The series also introduced popular voice actress and singer Maaya Sakamoto to the world, who played heroine Hitomi when she was only sixteen years old. A highly bowdlerized version of the show also played on Fox Kids in the US for a time and was a consummate flop.

The Legend of Himiko originated in 1999 as a multimedia project with an anime, a game, and a manga. To be honest, I know nothing about this series – it seems to be virtually forgotten in the annals of anime history. Now-defunct Central Park Media released it on DVD and VHS in the US in the early 00’s, and the series has amassed mediocre ratings with a relatively low number of votes on Anime News Network and MyAnimeList. It’s not available for streaming anywhere, the DVDs are long out of print, and considering its complete lack of impact, I’m not particularly inclined to seek it out.

From there, things more or less peter out. A few more girl-aimed isekai shows came out in the 00’s, but none of them had the audience or influence of their 90’s predecessors. There’s no real knowing why things changed, other than that anime and manga are highly susceptible to trends as a medium. Shojo manga in general began to move away from fantastical settings, focusing instead on more grounded high school romances and urban fantasy while action-adventure fantasy was increasingly considered the domain of shonen. It’s a real shame – to me, adventure shojo is often the perfect blend of character, story, and action.

9 thoughts on “Forgotten Realms: The Isekai Boom of the 90’s”